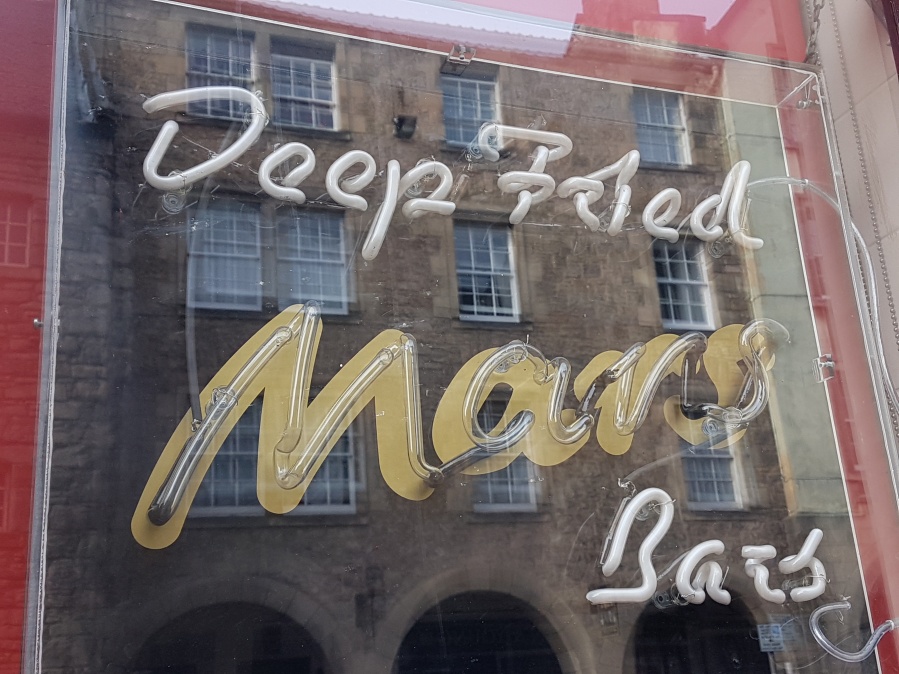 This is something that does my dinger.

To clarify, not the concept per se: if you want to dip a chocolate bar in batter, deep fry it in old chip fat and enjoy it in all it’s gooey, sticky goodness, that leads you to entering a sugar rush so extreme that can see through time, then fill yer boots – I will neither judge nor scoff and – to be honest – would probably be slightly envious.

No. What bothers me is how this joke – which is really how it started – has led to some tourists in Scotland thinking it is actually A Thing. Like, actually something that is Scottish. And that we eat.

As part of a prior job, I hosted some visitors to Edinburgh, many of whom had never been in Scotland. And it was a  big bit of a pain in the ass that so many of them said the thing they were most looking forward to was getting a deep-fried feckin Mars Bar. Twuntery.

It’s become Scottish because of it being bandied about in the media implying “oooh, look at them fat Scottish folk who deep fry everything! Chortle, chortle. Arf, arf!” A good friend informed me that a feature on Newsnight on the general election featured Glasgow and showed an image such as the one above! FFS.

So, this is first of (probably) many posts on the subject of Things That Are Not A Thing  in Scotland – but have become A Thing. And that piss me off.

On another note before I finish, please DO NOT think I am naive to think that we Scots do not enjoy a plethora of deep fried goods in chip shops. Many of these are a TOTAL Thing. So, if you’ll forgive a digression (of course you will, you lovely lot) here are three of my favourite “deep fried goods” stories:

Bottom line: Scottish cuisine is – in many ways – utterly superb. And I genuinely get peeved to think that the Deep Fried Mars Bar is considered part of that.

A croissy n’ chips on the other hand. Get involved.