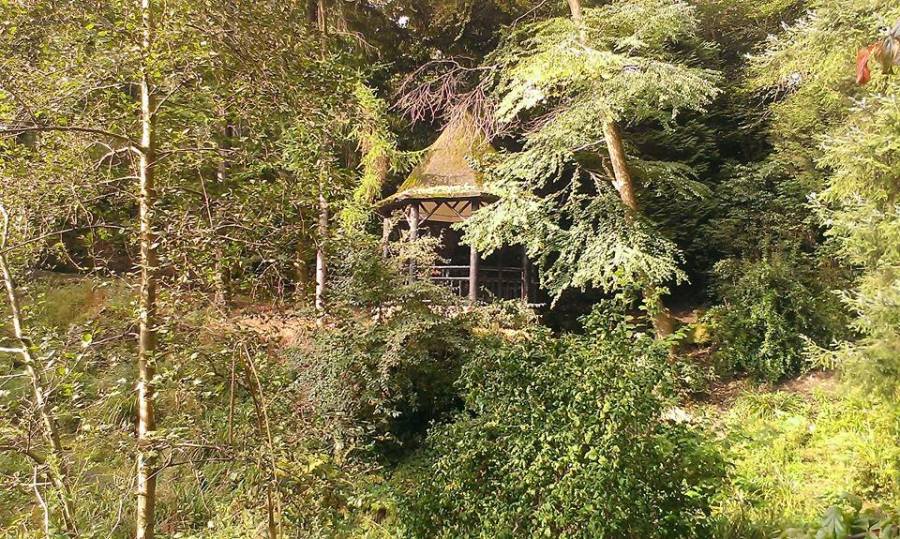 In the last couple of years, I have started spending time on (cue dramatic music) The Other Side Of The Bridge. By this, I mean over the Forth, from Edinburgh to the Kingdom of Fife (no, I dunno why it’s called a “Kingdom” – what am I, Wikipedia?) and – more specifically, Dunfermline.

Up until I started seeing the Grown Up Boyfriend, I had little reason to hang out in Dunfermline, which is where he lives. In fact, I actually – ashamedly – can’t remember ever having really been there before landing myself in a relationship with a Fifer. My mum did say that, as a small child, we used to go for day trips there sometimes, since my Granny apparently loved the place. Who knew? Anyway, even if you try, it’s not very easy to be someone’s girlfriend and *never* go to their house, hence why I have recently got to know Dunfermline fairly well.

And, here’s the thing. I like it. I like it a lot more than I expected to, actually. And, funnily enough, most of the negative things I’d heard about Dunfermline before I got to make up my own mind were actually from people I knew who grew up there! Coincidentally, I ended up working with a few folk from Dunfermline, who now live in Edinburgh and don’t speak very fondly of their home town. But this isn’t surprising: I don’t imagine that Dunfie was necessarily the most exciting place to grow up in (same as my home town, really) but – being completely new to the place – I happily didn’t have those memories to deal with.

So, some Good Things about Dunfermline:

1. It’s very historic – and I love a good bit of hot Scottish history action! Numerous Kings and Queens hung out in Dunfermline, with Robert Bruce being buried in Dunfermline Abbey. The Abbey is ace: it’s slap back in the town* centre and is a very picturesque ruin – Robert the Bruce is buried there (without his heart – it’s in Melrose Abbey in the Borders): 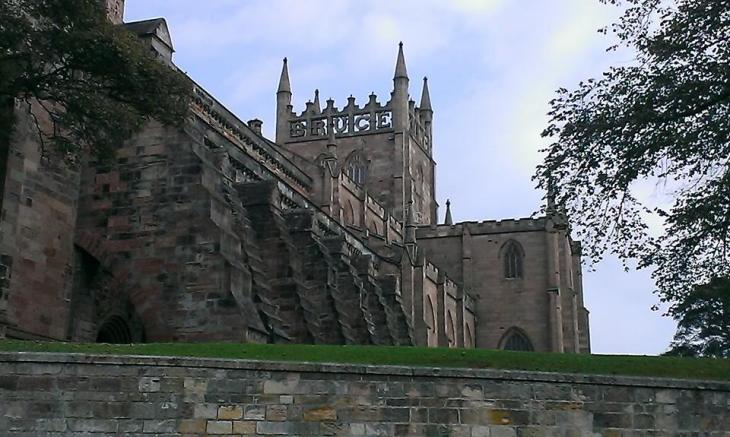 Can you see the word “Bruce” up in the tower there? Well, as you might expect, on the other three sides it says “King” “Robert” and “The”. Funky. 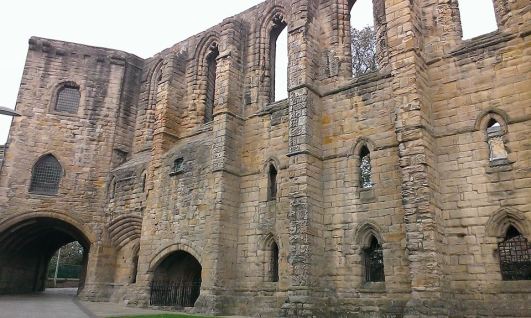 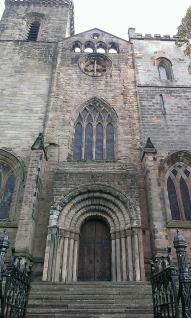 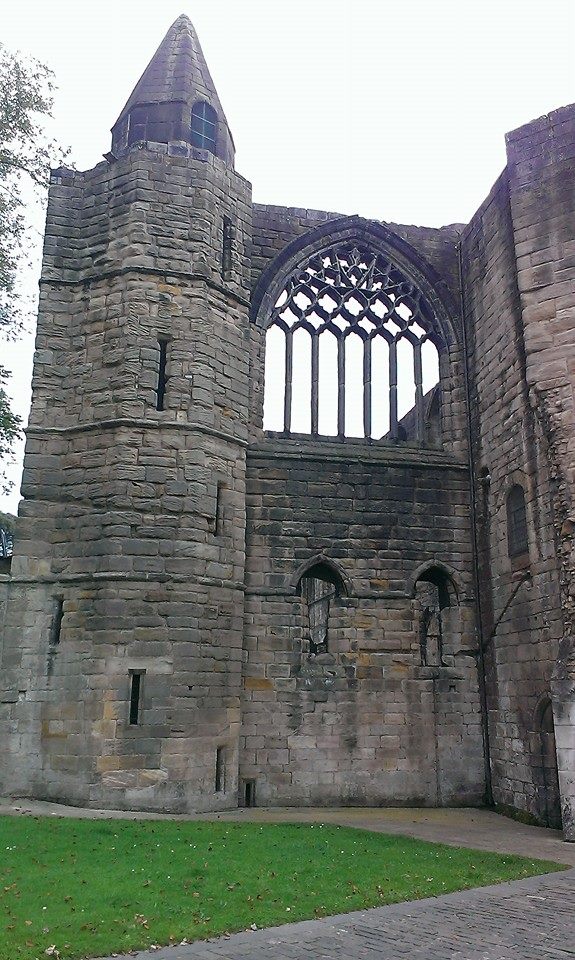 Brilliantly, right next to the Abbey, a new museum has just opened up – the Dunfermline Carnegie Library and Galleries. The old library has been refurbed and a whole new building been constructed to house a permanent museum about the history of Dunfermline – along with a nice cafe and some gallery space. It’s a great addition to the town*, with interesting stuff and lovely views over to the Abbey next door: 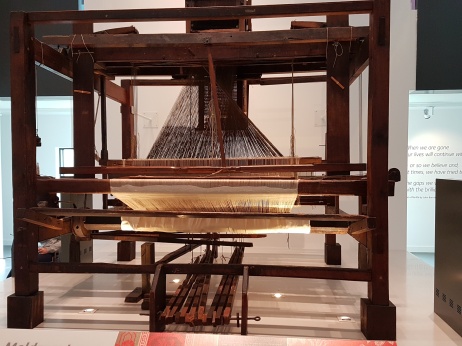 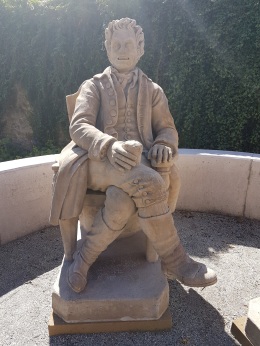 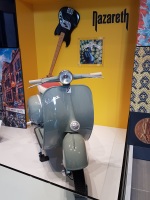 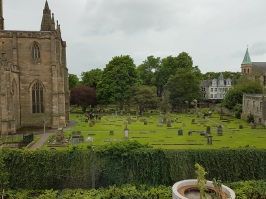 The abbey isn’t the only historic part of the town*. For example, there’s St Margaret’s Cave. If you’re not careful, you’ll miss this – the entrance is in a car park and you go down loads of stairs to this shrine thingie where Queen Margaret went to pray. It’s maybe not for the claustrophobic but I get The Fear in any enclosed spaces and I was ok with it.

Then there’s Andrew Carnegie. Now, the first time you visit Dunfermline, you’ll notice how many streets, buildings etc are named after this guy. And, by all accounts, he was a Thoroughly Jolly Good Bloke. He was born in Dunfermline in 1835, emigrated to the USA when he was a kid, made a LOT of money and became a philanthropist. He gave a lot of money back to his home town* – hence why so much is named after him and that there’s a massive statue to him in Pittencrieff Park (see below). The Carnegie Hall in New York is named after him – as is the one in Dunfermline itself. There’s a nice wee museum all about him and his relationship with Dunfermline: The Andrew Carnegie Birthplace Museum. When I went, the bloke working there was *incredibly* enthusiastic and gave me the proper low down so, if you go, make sure you have plenty of time to shoot the breeze!

2. Pittencrieff Park. Well, that’s its proper name but apparently NOBODY from Dunfermline calls it that. It’s called “The Glen”. Now, as a (slight) pedant this confuses me: ok, there is a glen there – and it’s awfie nice – but that’s just part of this HUMONGOUS park. But, if I were to go about calling it “Pittencrieff Park” folk would probably look at me funny (more so than usual). I *really* like the Glen (and, by that, I mean the whole park, not just the Glen – see this is confusing…). I’ve been loads of times – it’s great for long walks and running, and every time I go I seem to find another bit I hadn’t found before. There’s the mad wee summer house: 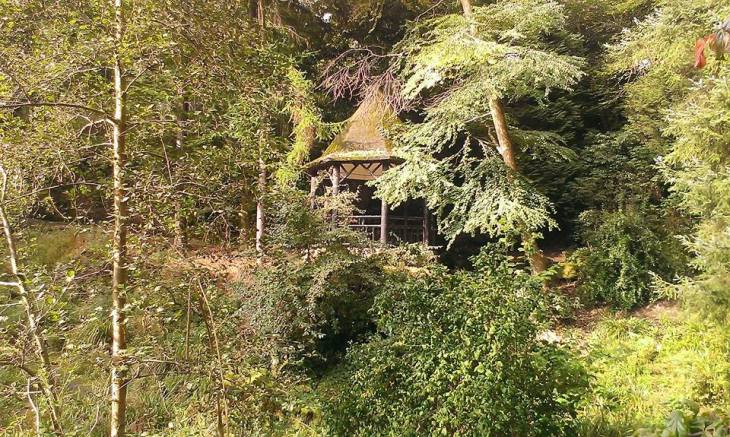 And great view across to the Forth: 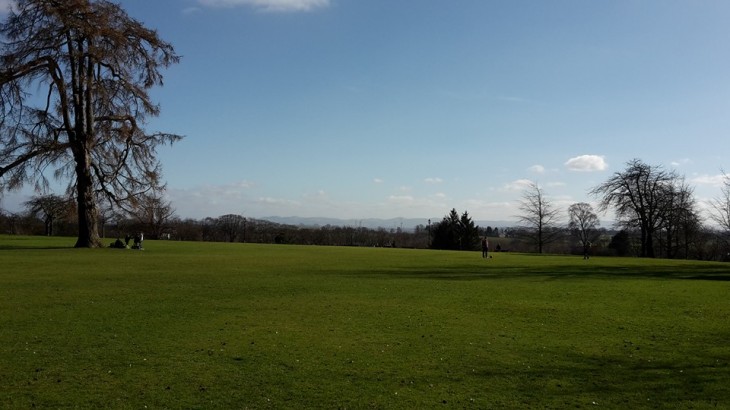 And there’s yet another museum in the Glen – Pittencrieff House. The Glen is also the venue for the usual stuff you’d find in any town when it comes to galas, celebration days etc – when you can win a tub of talc in the tombola and grab a nice, greasy burger – you get the picture. And there are PEACOCKS! I was unaware of their existence and was running in the Glen one day when I turned down a new path and there was a big cage with peacocks in it! I’ve also seen loads of squirrels and even buzzards flying overhead.

3. Shopping. No, really: for the size of the town* the shops aren’t too bad at all. Admittedly, there is a VERY high proportion of pound shops, bakers and cheap card shops, but there’s also a Primani and a decent Debenhams. And in the Kingsgate Centre, there’s one of those brow bars that charges a FULL TWO POUNDS LESS for a threading than in my local shopping centre in Edinburgh! Granted the woman who does it is a bit bossy (“hold!” “leave!” “hold!” “change!”) but that’s a small price to pay for the fact that it’s only a fiver.

4. Pubs and restaurants. Again, for the size of the place, there are a few decent places to eat and drink. The Canmore (previously called De Brus) is the place to go if you want to go a wee bit fancy pub-wise. They brew their own beer and it’s tasty – if maybe a bit pricey. But it’s a pleasant place to hang out and they often host events such as writers and booze tastings etc. The food’s pretty good – although the last time I went, they served me chips in a mini faux chip pan thingie and I haven’t quite forgiven them yet. The Grown Up Boyfriend and I favour the Old Inn – a decent, friendly boozer and they have the most AWESOME burgers. Seriously, something special. Be hungry if you go. We’re also not averse to an afternoon in the Wevvers (The Guildhall Linen Exchange to give it its proper name) – ach, say what you like: about Wetherspoons – what’s not to like about getting a pint of Tennent’s for £2.15 and sitting at a high table playing cards on a Sunday afternoon? Our favourite place to eat is Tapas Ducal. What a find this was! As good as ANY tapas I’ve had in posher places in Edinburgh and Glasgow (maybe even better) and much cheaper. Highly recommended. There are LOADS of other pubs in the town – many of which I have not had the guts to go into yet as they look somewhat colourful from the outside with a high jakey quotient. My favourite place for coffee and cake is the refurbed old fire station Fire Station Creative. They have excellent cake, they also serve wine and they have changing art exhibitions; the most recent being one about Scottish punk put together in part by Richard Jobson from The Skids: 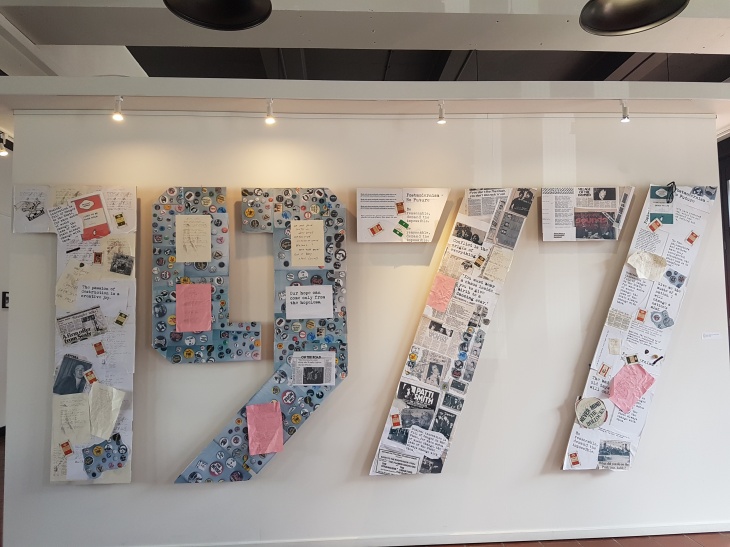 6.There’s a loch! And people water ski on it. Admittedly, the last time the water was strangely brown, but it’s still quite bonnie.

All in all, I do think Dunfermline might be a wee bit underrated. Admittedly, I don’t live there so maybe for me it’s still a bit of a novelty. But I reckon there’s quite a lot to like about it, really. Not that I’m ready to do the move-over-The-Bridge-to-take-advantage-of-the-cheaper-house-prices-and-moan-about-the-commute thing just yet… 😉

*OK so you’ll have noticed that every time I refer to Dunfermline as a town, I have a *. This is because it’s actually a city. Well, kind of. From what I can make out, it’s one of those places referred to as a city for historical rather than an “official” reasons. The signs as you enter welcome you to “The City and Royal Burgh of Dunfermline” so there you go. Far be it from me to underplay Dunfermline’s city status – wouldn’t want the locals in the Old Inn to get annoyed 🙂

5 thoughts on “A Non-Fifer’s Guide to Dunfermline”