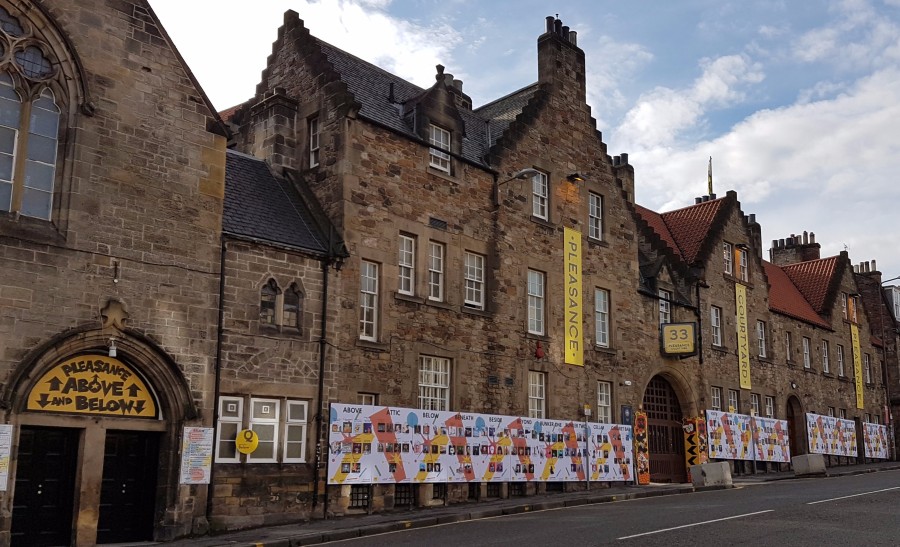 As you will have picked up if you know me / read my blog, I am a resident of Edinburgh – and have been for twenty years. Over those two decades, I have developed a love / hate relationship with the behemoth that is the Edinburgh Festival. This year’s began a week or so ago and we’re well into the swing of it…

Now, before you stop reading, expecting a massive “I AM NOT A TOURIST! I LIVE HERE!” rant, that’s not *exactly* what this blog post is about. Look, if you want that, you don’t have to look too far in the ‘Burgh: hunners of locals would be only too happy to bend your ear about how August is HELL and how they are so ANGRY about the TOURISTS and the TRAFFIC etc etc etc. And – fuck it, let’s be honest here – I have often been one of those moaners (no – honestly, I know it’s hard to believe when I have such a sunny disposition, but it’s true!). In fact, in years gone by, there were Augusts which went by with me doing *nothing* Festivally at all. These were the years when I was in a massive huff with the Fringe: I was skint and ticket prices were starting to get really silly; plus I actually had to WORK during August! The very thought! Bah! I began to dread August and resent the fact that everyone was in a party mood except for ME. It was so UNFAIR! I was a bit like Kevin the Teenager, but older and – therefore – probably infinitely more annoying: 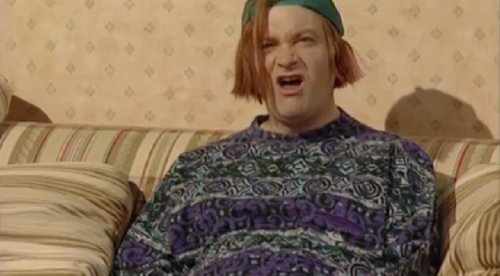 Nowadays, although I do still have to WORK during August (and it’s actually a bloody busy time of year for me, work-wise!) I am less hateful of the Fringe. This is because I have come up with a few rules by which I live to help me enjoy August and to remind me that I live in a city which has this phenomenal thing, which I really should appreciate, rather than get my spurtle in a spin about. Don’t get me wrong – I am not always zen-like throughout the Fringe and phrases such as the ones below may be used by me a number of times over August:

Anyway, back to my “rules”

1. Never be in a hurry.
The population of Edinburgh goes off the scale over the Fringe. Therefore, you are sharing the place with many, many, MANY people – most of whom won’t know the city and will be wandering round in a state of confusion / awe / joy / possible sexual arousal at All The History.
My advice? Expect any journey on foot to take at least 20% longer than it usually does. And factor in extra time if you’re crazy enough to drive anywhere too. Oh and the buses are usually fucked too: a person I was talking to in the gym the other day was saying it took her bus 15 minutes to go a distance of approximately 300 metres, before the bus driver (bless Lothian Bus drivers – the shite they must have to put up with over the summer!) asked the folk on the bus if they minded him just changing the route to allow them to actually MOVE! Obvs, expect to stand on the bus – whether or not you usually do – and also expect a lot of pissing about over change as people get on buses (see point 2 above)

2. Plan, but don’t over-plan.
Dinnae bother perusing the Fringe brochure in any structured way. Honestly, there are well over 3000 shows / events, in around 300 venues! So if you circle (or highlight, if you’re as into stationery and fancy pens as I am) all the ones that take your fancy, you’ll go mad. Not to mention the fact that you’ll need to rob a bank / take out a second mortgage / live off Lidl beans for all of September, October and November to fund the price of the tickets. Fair enough, if you have a favourite comedian, say, and you want to see if they are doing a show, then look them up. But, otherwise, if you’re “doing” the Fringe, get one or two tickets in advance, then just go with the flow after that. You never know what you might end up going to see! Yes, some of it will be shite*, but there will undoubtedly be some gems out there. And ask pals for recommendations as the weeks go by.

*START DIVERSION* Speaking of shite, I’ve been trying to think of the WORST Fringe show I’ve ever seen and – thankfully – I’ve actually been quite lucky: because I never go and see LOADS of things ( I am both selective and a tight wad), there have only been a few that were memorably dreadful. There was the time I fell asleep at Mark Lamarr‘s stand up show. This was in the 90s when he was a big star. To be fair, it was after midnight and I was a bit pissed. But, also, he was about as funny as a dose of the squirts when you’re far from a cludgie. Then there was the amateur musical I was dragged to (a friend of a friend was in it) called… aww fuck, what was it called?? Something like “Showbiz!” or “Tinsel Town!” or something like that (there was definitely an exclamation mark involved – and, I’m sure, jazz hands) and it was FUCKING TRAGIC. Then there was the adaptation of some obscure victorian short story which was staged in a tiny room. It was *awful* and there were only about 7 of us in the audience. Then the fire alarm went off! Myself and the pal I was with were ready to just do a runner at that point but, being the kind souls that we are (well, that SHE is) we went back in – only to find that the the other five people in the audience had – sensibly – made themselves scarce. *END DIVERSION*

3. Accept the fact that you will be overcharged for booze and street food.
To be fair, the price of a pint in Edinburgh is already pretty eye-watering in places, but some of the venues’ bars are crazy! Best part of a fiver (often more) for a pint of not-very-chilled lager in a flimsy plastic glass. That being said, I actually think that there are a couple of bigger venues have had a word with themselves in the last couple of years and aren’t quite as much of a rip-off as in the past.
There is some joyous street food available near the main venues but, again, sometimes the prices are insane. However, there are times that I just can’t say no, and end up splashing out, like, £9 on a “gourmet” burger from a van. Don’t judge me! You weren’t there! You didn’t SMELL it! Hmmmmmmm. The best / worst food rip-off insanity I saw a couple of years back was a wee van selling sweetcorn – no, really, GREEN GIANT sweetcorn (they were even displaying the tins) – for a pound a portion (and a portion was a half-filled wee white plastic cup). WTactualF?

4. Always carry an umbrella. It’s the Fringe. The weather will be shite.

5. Develop a Bitch / Bastard face.
This is very handy when trying to walk from A to B to avoid those over-enthusiastic young uns who attempt to thrust flyers into your hands. Well, it’s up to you, though: if you want to collect pieces of paper you’ll just chuck out later, fill your boots. I, for one, play the “Fringe Flyer Challenge” every year – which involves avoiding being handed ANY flyers. This is where the Bitch / Bastard Face comes in handy. Don’t get me wrong: I am not rude to these folk – they’re just trying to make a bit of cash and it must be a crappy job – but a B/BF tends to be enough to get them to not even attempt it most of the time.
The only exception to this is when you’re sitting in the bar of a venue and they try and pounce on you to Give You The Spiel. Shudder. I do still try and remain friendly in these cases – but it’s not always easy.

6. Seek out freebies / cheapies.
There two “free” Fringes – the original PBH’s Free Fringe, started by comedian Peter Buckley Hill; and the Free Festival – where you just chuck some cash in a big bucket at the end of the show. These are dead handy as you can try out stuff without shelling out £15 for an hour of comedy which might be as funny as a fork in the eye and a spoon snapped harshly over the groin.
And – certainly this year – other venues have started offering tickets within a less insane price bracket. For example, this week, I actually saw probably my favourite comedian of the moment – Larry Dean – for a FIVER for two tickets! It was a 2-for-1 day, but even a fiver for one ticket is a TOTAL bargain. AND whatsmore, the pre-paid fiver tickets are only if  you want to ensure you get a ticket: you could actually go and pay whatever you wanted if you were willing to go along hoping it wasn’t sold out. Bravo, Monkey Barrel Comedy Club!
I have also on some occasions been handed freebies in bars (that’s a lot less dodgy than it sounds…) for shows that haven’t sold too well, just to boost audience numbers. And have seen some good stuff that way: comedian Martin Mor comes to mind.

7. Don’t try to do too much.
Seriously: Chill. Out.
If you have only a short time at the Fringe, you’ll be tempted to cram in loads of shows and end up feckin knackered and unable to summon up the energy to lift your plastic tumbler of overpriced lager. Or your half-filled plastic cup of sweetcorn.
I have been in comedy shows before where people have walked out before the end, apologising to the comedian, saying they have another show to get to! FFS! You can’t do everything, so don’t try. Instead, when it’s not pissing rain, find a seat outside at a venue and just do a bit of people-watching (but don’t make eye contact with anyone in a “costume” cos you might end up getting involved in an impromptu performance). Enjoy the atmosphere. Talk to someone you don’t know (they’ll likely be sharing your table since it’s so busy). Have a look at some show reviews. And take your time to plan your next move. This “time out” may also help you avoid going postal if you’re starting to lose patience with the crowds.

8. There’s more to Edinburgh than the main Festival venues! Leave. The. City. Centre. Water of Leith. Botanic Gardens. Leith. Portobello. Do it. You’ll feel better for it. Like having a decent portion of roughage.

So, in conclusion: the Edinburgh Festival is bloody brilliant. If it’s not for you, fine: but don’t be a cliché of the grouchy local (and I say that as a recovering Edinburgh-Festival-Local-Grinch). Yes, us locals can moan: we’re inconvenienced; it’s expensive; there will be *mimes*. But, let’s not lose sight of what a Thing this is. And let’s not cut off our noses to spite our faces: get involved. And just remember: September isn’t far away.