Unless you have been under a rock (or, more likely, under your duvet hiding from the latest antics of that twunt with a shite hair-do in North Korea and that other twunt with an even shiter hair-do in the USA) you will have seen that the brand spanking new bridge linking Edinburgh (at the town of South Queensferry) to Fife – The Queensferry Crossing – is OPEN!! Woo hoo!

The Queensferry Crossing is the third bridge over the Firth of Forth at this point – the other two, of course, being the *actual* Forth Bridge (ie the one for the trains which has got to be one of the most iconic things about Scotland, opened in 1890) and the original Forth Road Bridge (opened in 1964). Apparently, some Important People suggested as far back as the early 90s that the Forth Road Bridge needed replacing. But there was a lot of moaning and gnashing of teeth and plans were chucked out in about 1997. It wasn’t until some other Important Person (or People) pointed out that the poor old Forth Road Bridge was “a bit fucked” (they probably put it slightly more politely) and might end up having to be closed by about 2019 if serious structural repairs didn’t happen, that plans for the new bridge went ahead. And in late 2011 the work started.

Incidentally, there was a public vote to name the new bridge. The Folk In Charge only gave the public five names to choose from and they weren’t allowed to come up with their own suggestions, so the option of Bridgey McBridge Face was never on the cards, sadly.

For those of you who read this blog and / or know me, you’ll know that Grown Up Boyfriend lives in Fife and I live in Edinburgh, so because we go back and forth (Forth, geddit?) so often, we’ve seen the bridge gradually get more and more bridgey over the 3ish years we’ve been together. It’s been very cool seeing the transformation (less cool dealing with the roadworks, but you can’t make an omelette without breaking wind) so I was delighted that we got a chance to take part in the “Queensferry Crossing Experience”.

The Queensferry Crossing is going to be a motorway, unlike the original Forth Road Bridge, which folk can walk and cycle across. So, the powers that be decided to offer folk the chance to walk the 1.7 miles over the bridge: a “once in a lifetime” opportunity. Folk could apply for a place through a ballot. Apparently, over 226,000 people applied for the 50,000 places and I was lucky enough to get selected – ya beauty! I’d applied for two tickets, so Grown Up Boyfriend got to come along too. Look at the fancy invitation!

We were assigned an afternoon slot, starting from Edinburgh Park (a sprawling business park with no soul that gives me The Fear a few miles out of the city centre). We didn’t have to be there til 2.30pm so obviously since it was a “special occasion”, I insisted that we NEEDED to go for a massive brunch first. We recently discovered the delights of the breakfast menu at Treacle on Broughton Street. At first glance at the shiny chrome fittings, fancy cushions and Twin Peaks on the telly, you’d be forgiven for thinking that this is just another hipster bar of supreme wankery, but in actual fact the food is bloody marvellous and good value, it has a lovely atmosphere, and the staff are very non-arsey too. Result! On the excuse of having “such a long walk” later (ahem…) I ordered their full breakfast and, oh my me, is it full! Because I was completely STARVING by the time we ate, I neglected to pause to take a photo before shovelling the lorne sausage and tattie scones into my gob, so you’ll just have to trust me when I say it was very big and very beautiful.

After rolling myself out of Treacle (there’s a mental picture we could all do without…) we had time for a wee bit of culture at the Scottish National Portrait Gallery on Queen Street:

Then, we headed for the tram.

OK (*rolls up sleeves*): it’s time for the bit about The Bastard Trams.

For those of you unaware of this prize farce, here it is in a nutshell:

Some Edinburgh councillor bods – back in 2003ish – had the following conversation (this may not be exactly verbatim, but it’d have been this or something very similar..)

Council-type 1: Hey everyone! You know what Edinburgh REALLY needs?

Council-type 4: A permanent sign on the statue of Greyfriar’s Bobby to tell everyone to LEAVE HIS NOSE THE FUCK ALONE.

Council-type 1: No – not even that! What we need is TRAMS! ALL THE TRAMS! They’ll stretch all the way from the airport in the West to the up-and-coming Granton area in the East and we will be the envy of every city in the WORLD and all shall be well! It’ll cost just £375 million quid and it’ll be done by 2009. Bish, bash, bosh! Now, time for a drink!

Cut to 2014. Trams finally run on Edinburgh streets. But only from the airport to York Place in the city centre (ie a fraction of the distance originally planned) and cost – wait for it – about £776 million pounds. Bra-fucking-vo (slow, sarcastic hand clap).

AAAAAAANYWAY – that’s all water under the (Forth) Bridge. The trams are lovely and shiny and the citizens of Edinburgh are absolutely not bitter. Aye, right – and I’m a kelpie’s auntie.

I have actually only been on an Edinburgh Tram once before – I just don’t have a need for it – although on Sunday it was damn handy, I have to say! Jumped on at St Andrew Square, straight through to Edinburgh Park, where our “Queensferry Crossing Experience” began. Oooh exciting!

Credit where credit’s due, the organisation of this mammoth undertaking was superb. We were welcomed and directed by friendly event staff, then we donned our sexy lanyards and boarded the bus to the start of the Crossing, just outside South Queensferry. The bridge itself did actually open to traffic on Wednesday 30th August 2017 (and by 7am a big truck broke down with its arse sticking out and almost brought traffic to a standstill – hehehehe) but was shut again for a few days to allow this “experience” to take place – and for Her Maj to do the official (very huge, presumably) ribbon-cutting. Contrary to my expectations, it wasn’t absolutely rammed, so there was plenty of room for good photos (well, good photos if you are actually good at taking photos, unlike me):

Because we did the Edinburgh to Fife direction, we didn’t get a direct view over to the other Forth bridges, which was a pity – although the views out to the other direction of the Forth weren’t bad!

Along the way were boards with facts about the Bridge, which was a nice touch, and there was genuinely a sense of happiness, pride and celebration about the place. 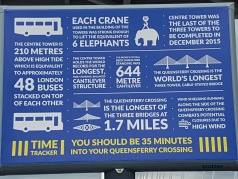 We had been assigned an hour on the bridge, but nobody was hurrying anyone along. There were plenty of buses for the journey back to Edinburgh Park and, again, I couldn’t fault the organisers on the travel arrangements.

OK, yes, it was just a walk across a bridge. What was so special about that? Well, maybe for some people, nothing at all. But – fuck it – I’m partial to a bit of romanticism and I like the idea of knowing in years to come that I was one of the relatively few who got a chance to do it. Cos, let’s be honest, if I find myself walking on it when it becomes a motorway, something will have gone very wrong.

And let’s remember what a feat of engineering this bloody thing is: it’s the WORLD’s longest three-tower cable-stayed bridge; it has 23,000 MILES of cabling; the towers are over 200 metres high! And, most staggering of all, it was (apparently) UNDER BUDGET! Ach, if only the folk that did the sums on the Bridge could’ve done the sums on the Bastard Trams, eh? 😉