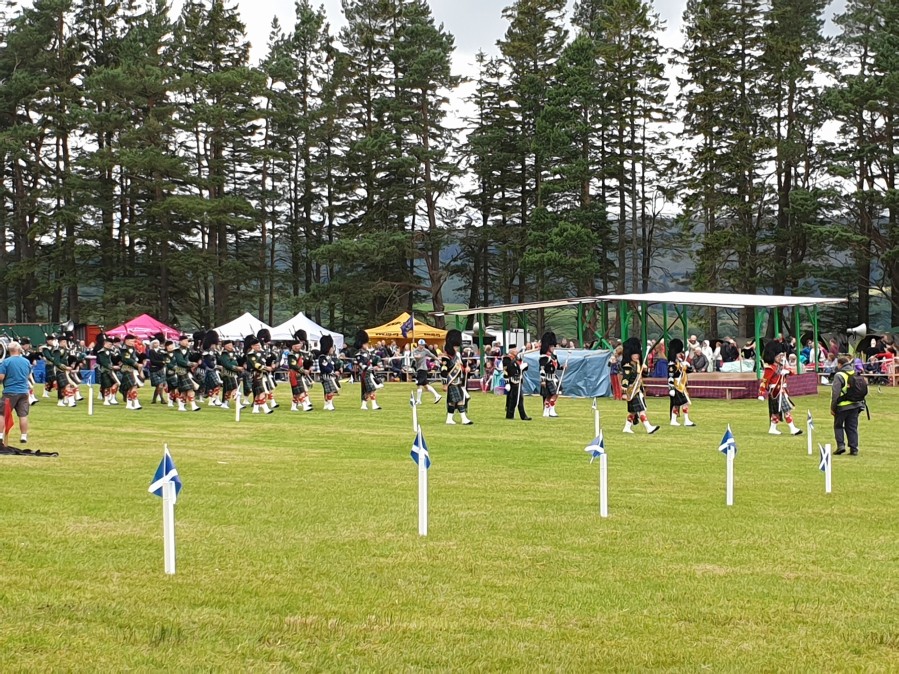 A couple of weekends ago, I *finally* made it to my first ever Highland Games! It was at Tomintoul, in Moray I emphasise “finally” as my mum and step-dad go to this every year: my step-dad grew up in Tomintoul and him and mum are patrons of the Games. I am not entirely sure exactly what this means, except that they get to sit in the VIP pop-up pub bit and drink whisky when it pisses with rain.

My step dad lived in Tomintoul when they didn’t even have electricity! Don’t get him and his big sister started on *exactly* what year electricity came to Tomintoul: they vehemently do not agree and I’ve seen it almost come to blows…

Anyway, every year it seems that one thing or another prevented me from joining them, but this year I – miraculously – had a *free weekend*. And, equally miraculously, so did the Boyf, so he joined me (I’m sure he was really well excited for it and it wasn’t just the thrill of getting to drive on scary, winding highland roads in his fancy new car to get there that he was focused on).

I’ll pause here for a quick digression about the pronunciation of “Tomintioul”. Now, I’m taking this from my step-dad and is family, and since they are from there, I think we can all rest assured it is correct. It’s NOT pronounced Tomin-TOOL as in the sentence “Boris Johnson is a compete and utter TOOL”. It is pronounced Tomin-TOWEL as in, rhymes with “bowel”, as in the phrase “Boris Johnson makes me feel sick to the depths of my BOWEL”. Got it?

Tomintoul is the highest village in the Highlands. It’s nestled is some seriously stunning scenery. I am ashamed to admit, I am not too familiar with the east side of the highlands: when I head north, it’s invariably to the west highlands, but this is something I must rectify as this area is beautiful. 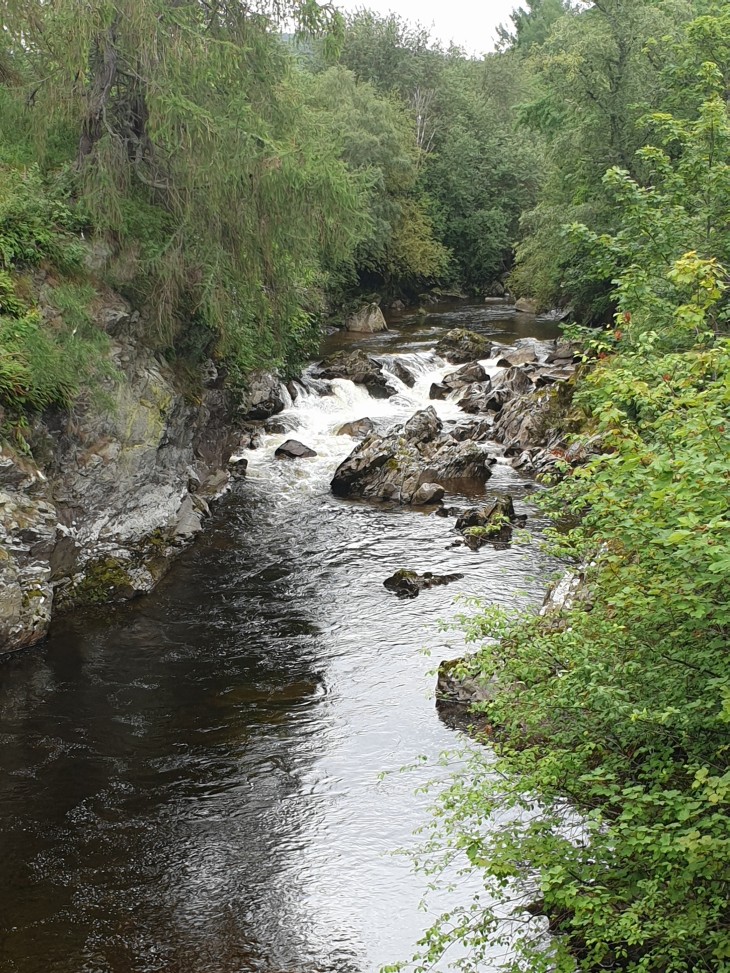 This photo was taken in Braemar, which is just a wee bit south of Tomintoul. We had a quick beer pick-up stop there on the drive up – lovely wee place (it also has its own very famous Highland Games – or “Gathering”).

We arrived in Tomintoul – predictably – in the pissing rain. And the rain persisted most of the day, off and on. However, as the old saying goes: there’s no such thing as bad weather, only the wrong clothes! Kind of. So, the brollies went up and we got on with enjoying the Games (that is, after the obligatory wodge of meat-in-a-roll, courtesy of an *awesome* local butcher’s Tomintoul Venison. Top quality snackage: none of your crappy, insipid mystery-meat burger in a stale bun here!)

Have you ever been to a Highland Games? Basically, it’s a bit like a huge school sports day, but for (mainly) blokes built like brick shit houses to show their friends and neighbours how strong they are, by throwing various objects of silly amounts of weights in various directions. Plus there are pipe bands. And dancers. And FOOD. And BOOZE. Essentially, it’s the mutts nuts and a properly fun way to spend a rainy Saturday in July.

The sporting events are split into “Lights” and “Heavies” (at this point I’ll apologise to folk who know more about this than I do in case I make any mistakes – this is what I could glean from watching the events and reading the programme).

The “Lights” are athletic events, like running races and the high jump (this year the rain was too heavy for the high jump, so they did a “standing long jump” instead). The most note-worthy race at Tomintoul is probably the “Hill Race”, which is just over 5km and basically involves running up a massive bloody hill and back down again. I am reliably informed that it is “Tough as Fuck”, as the terrain is very rough – especially after all the rain! It’s open to anyone brave enough to give it a go: my sister and I have tentatively said we might go for it next year. Aye, we’ll see…

The “Heavies” are the strength / throwing events that you might have in your mind when you think “Highland Games”. Amongst other things, there were the “Stones” which looked just like the shot put, but with a massive big stone, rather than the wee ball I used to chuck about in PE at school. The “light” one weighs 16lbs and the heavy one is 22lbs. And these guys give it some welly!! 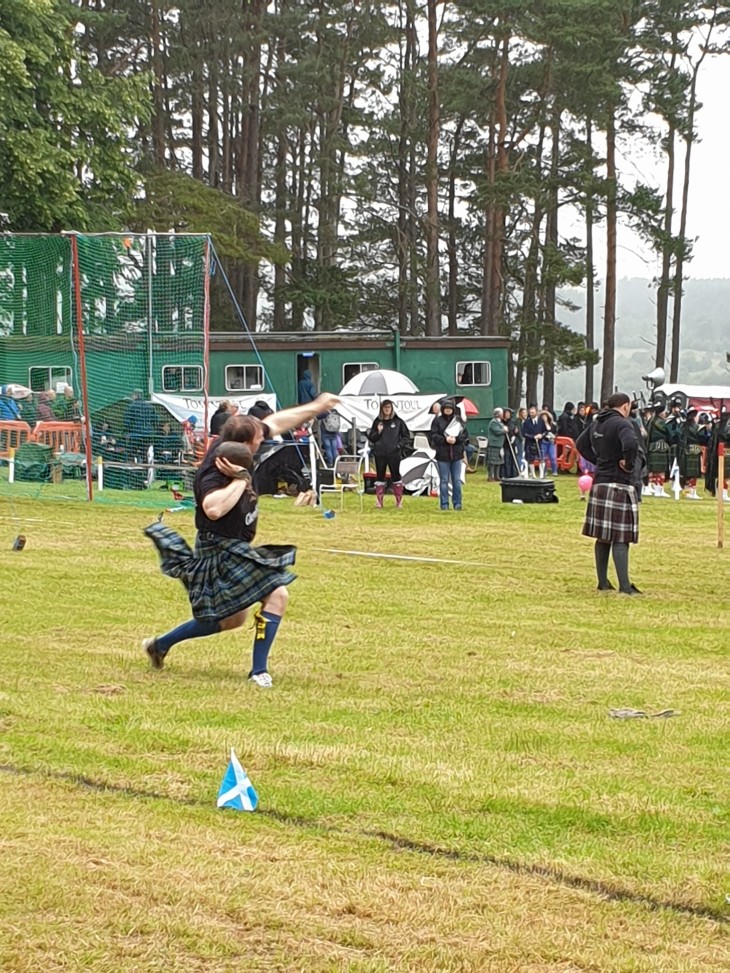 We also saw them weiching insane things that were like a big ball and chain. Oooft. Stand well back, folks! I think this is what they call the “hammer”? I was getting awfie nervous for the guys standing in front of the throwing area ready to measure distances. Health and Safety, anyone??!! 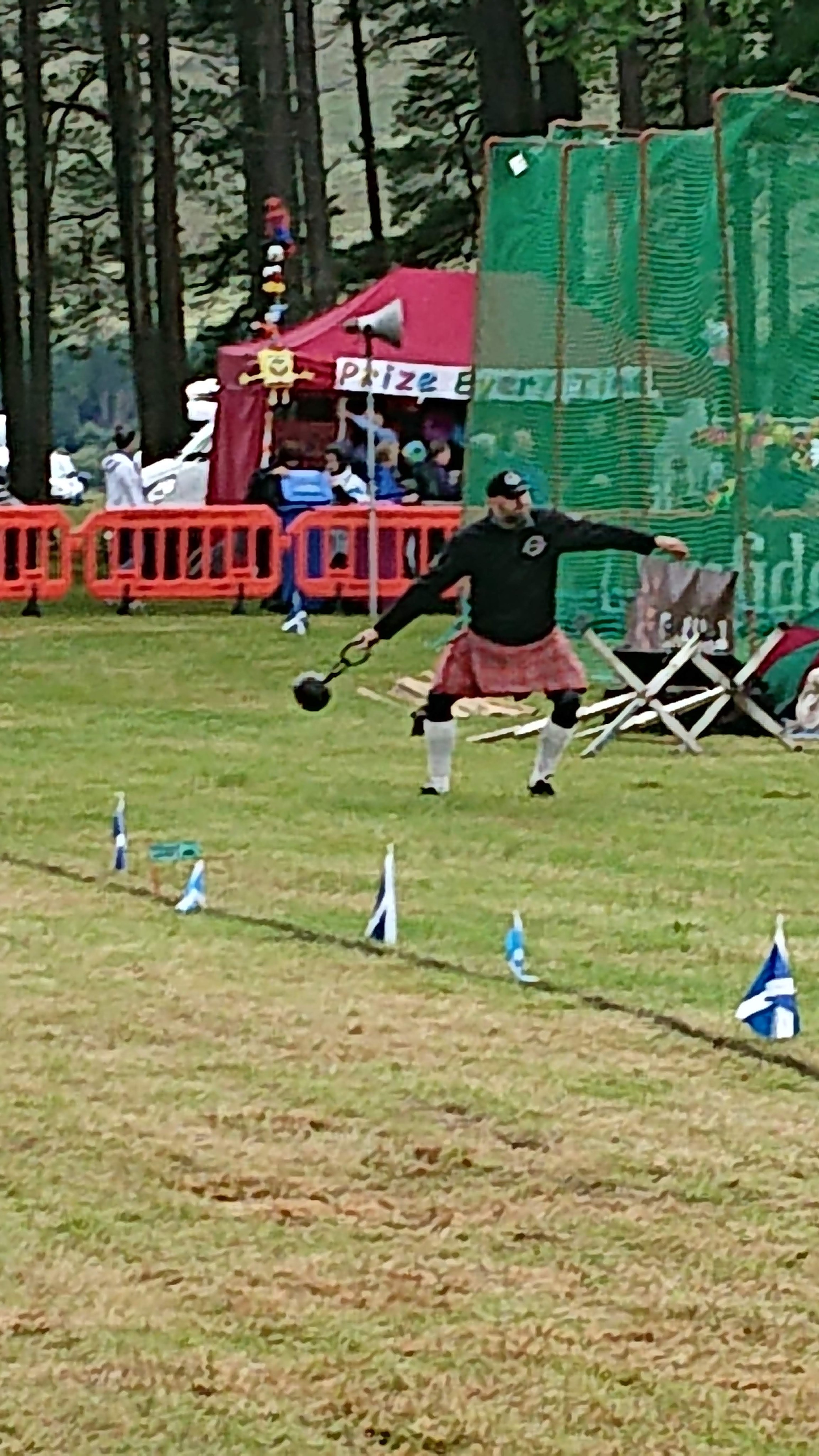 The most iconic throwing event at any Highland games is Tossing the Caber. Although this sounds a bit like a dirty euphemism, it is actually the art of picking up the trunk of a tree, humphing it onto your shoulder, then tossing it over end-to-end, so that it lies as straight as possible on the ground – they use a clock face pattern to judge that, with the aim being to get it to 12 o’clock. It really is an impressive thing to watch! Almost every competitor managed to howf these over, almost making it look easy! 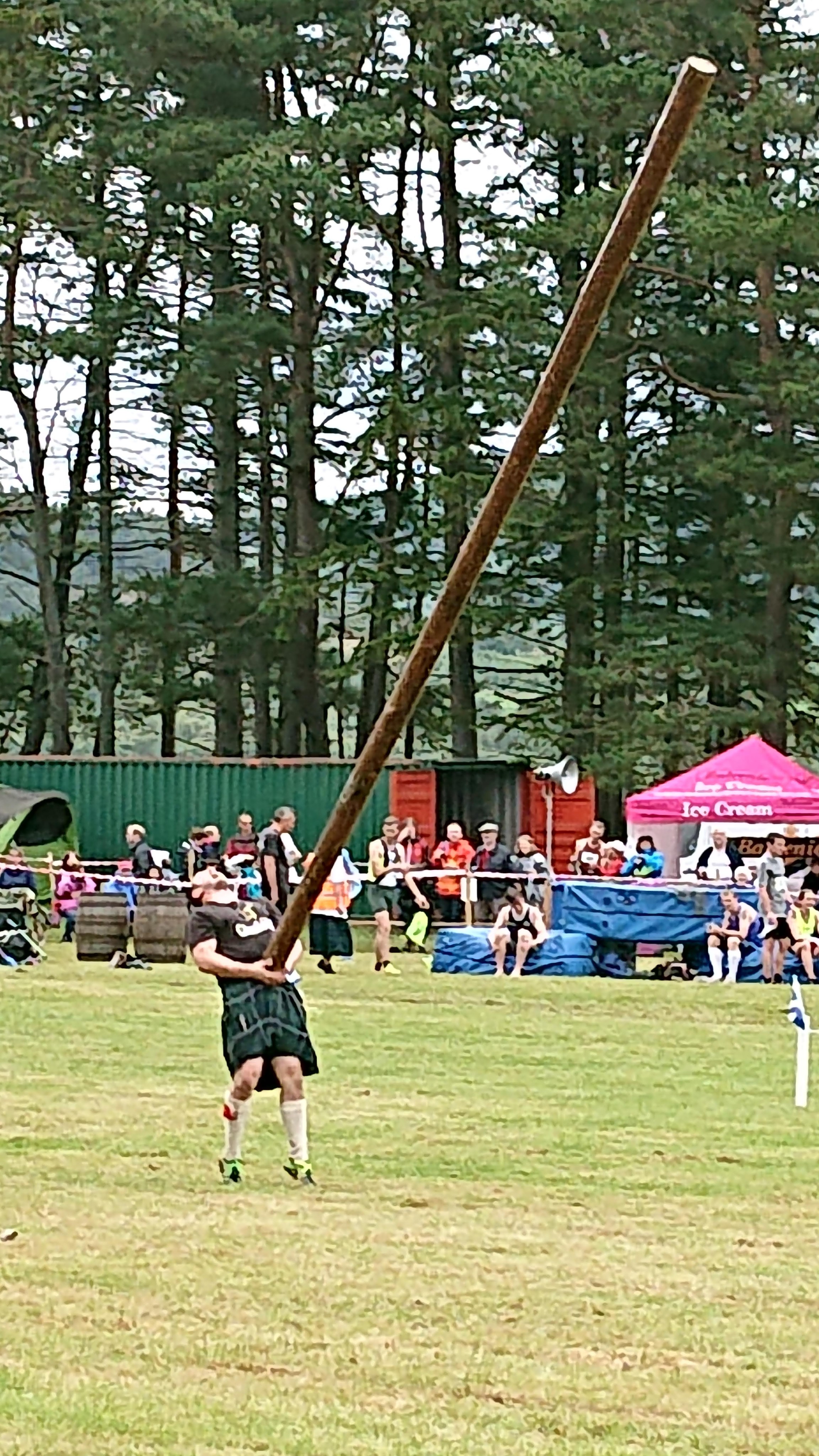 The Tug o’ War was loads of fun to watch:

There was a team visiting from the USA who had a go at beating the local teams. Ach, it’s the taking part that counts, eh lads? 😉

Another brilliant event came towards the end of the day and involved the guys who led the pipe bands (I know they have a proper name, but I am a bit crap – drum majors?) birling their maces (that big long staff thing the hold up while leading their band’s marching) and then chucking it over a bar and catching it again. Each time they do it, the bar is raised for the next round. Very impressive stuff! Some of them did some very fancy twisting turning and throwing – a wee bit like heavy duty majorettes 🙂

Throughout that day, there were also bag-piping and highland dancing competitions going on – as well as fun events and kids’ races. Plus a huge array of stalls to buy souvenirs (and umbrellas…) and to try and win stuff at.

And here’s where my day got even better. I won this beauty! 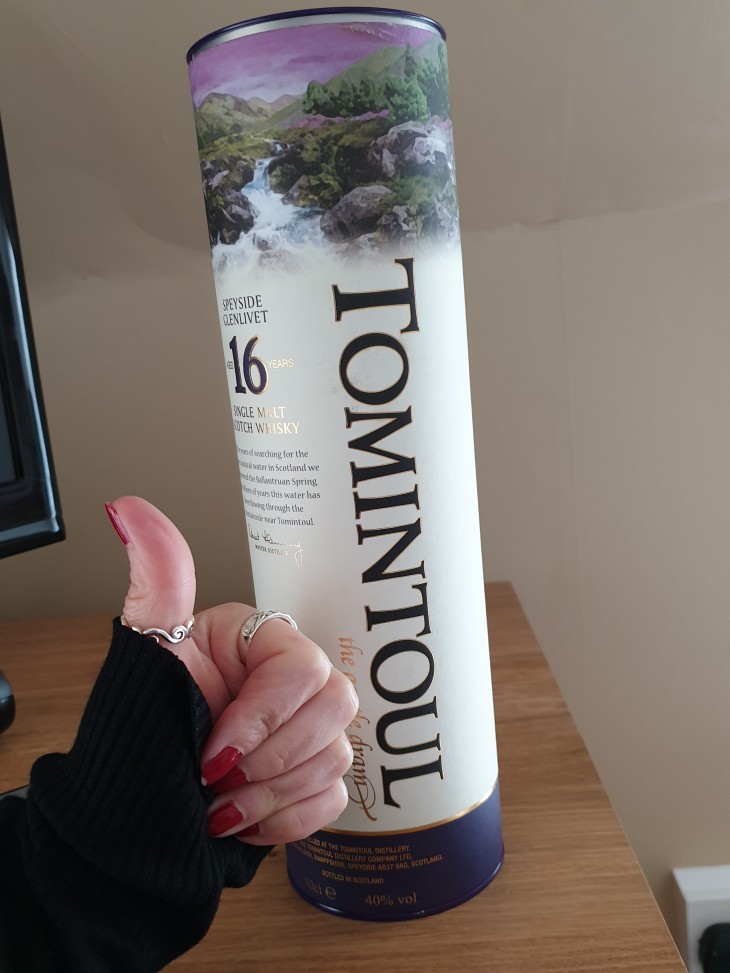 Well, if we’re splitting hairs, the Boyf won it, really. But since he doesn’t like whisky (I know, I know – freak of nature…) I thought it best to lay my claim to it sharpish… It is a delicious 16 year old Tomintoul single malt.

After watching all the fit and strong folk, and filling up on tea and doughnuts (and sharing a wee bottle of Prosecco with my sis that she won in the tombola, slugging it oot the bottle – classy!), Boyf and I headed to the hotel we were spending the night in for a wee rest and refresh…

The Glenavon was a pleasant surprise: it was less then £70 for B&B for the pair of us for the night, which – considering the Games weekend must be the busiest weekend in the village all year – was a proper bargain. The woman who showed us to our room warned us that Games Day gets very rowdy at night, so we might get kept awake a bit

After an evening spent in the wee cottage my mum and step-dad were staying in just up the road (much food, whisky and hilarity – and further arguments regarding Tomintoul and electricity – see above…), Boyf and I headed back to the Glenavon for a “night cap” in the bar. Oooft, it was jumping! The friendly barman thanked us for our “easy order” (ie two pints of Tennents) saying “I’ve just been asked for 12 vodka and oranges!” and we found a quiet(ish) seat away from the partying young uns. Us auld yins retired after only one drink and – surprisingly – didn’t hear a thing after that! I think this was owing to the direction our room faced rather than folk being quiet and reserved when they left the pub, mind you! There was some serious partying going on that night 🙂

An excellent trip to Tomintoul was topped off with breakfast at the Glenavon on Sunday morning: 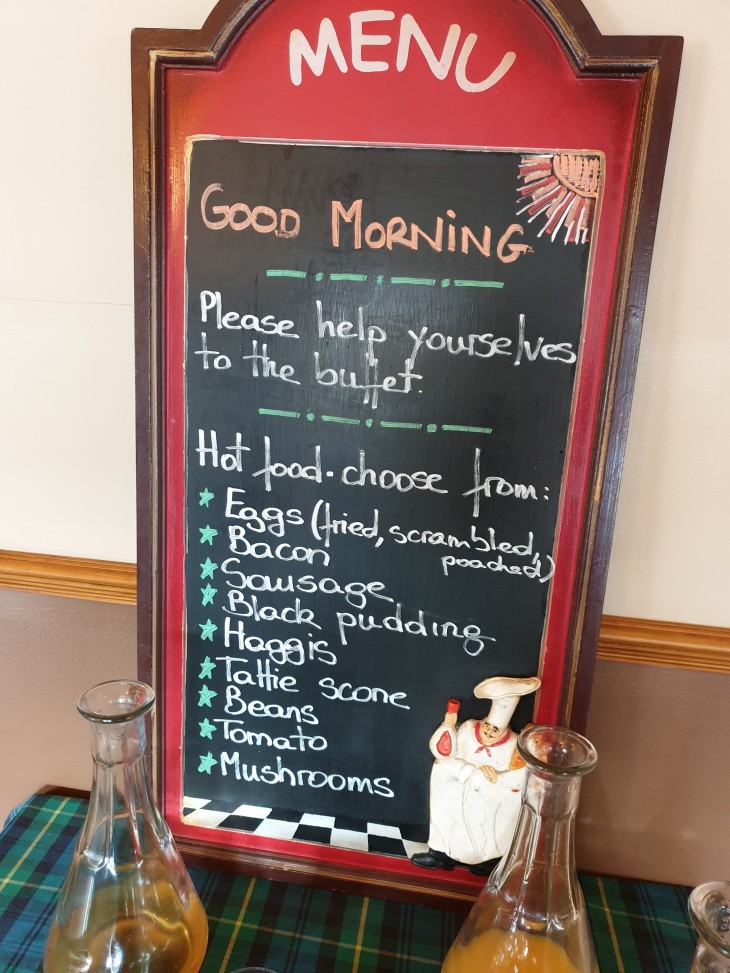 We ate well. Very well. It would’ve been rude not to!

Find out all you need to know about the fantastic Tomintoul Highland Games – and plan your trip there for next July! – here

**Huge apologies to anyone featured in these photos for not knowing your names! I hope you don’t mind me using them! To say I was impressed by your strength is an understatement!**